Nora Ephron is probably one of the few directors who needs no introduction. She penned one of the most classic romantic comedies, When Harry Met Sally and directed Sleepless in Seattle, You’ve Got Mail, and Julie & Julia.

But before becoming a box office hit, Ephron struggled to gain entry into the studio scene. When trying to mount This Is My Life, which would become her directorial debut, she was told by a (male) executive at a studio that they wouldn’t be able to finance her project after all, but not to take it “personally.” Ephron didn’t admit it in the room, but she said she didn’t know how else to take the incident but personally. She said that gender doesn’t matter, if someone doesn’t have interest in your project, something you are putting all your passion into, of course you are going to take it personally.

Later, in You’ve Got Mail, she used this incident from her past in the film’s storyline. When a big box bookstore, Fox Books, runs an independent bookstore, The Little Shop Around The Corner, out of business, Fox Books’ owner Joe Fox, tells Little Shop’s owner, Kathleen Kelly, not to take it personally. She takes offense to his comment. “All that means is it wasn’t personal to you, but it was personal to me. It was personal to a lot of people. And what is so wrong with being personal anyway? Whatever else anything is it should start by being personal.”

Ephron’s sons have said that one of her favorite phrases was, “Everything is copy.” Ephron certainly wrote about experiences from her own life, turning them into articles, essays, books, or screenplays.

Perhaps part of that comes from her upbringing. Ephron was born in New York, the eldest of four daughters of Henry and Phoebe Ephron, who were screenwriters. Her parents based the character in their play and film, Take Her, She’s Mine, on 22-year-old Nora and her letters from college.

Born in New York, Ephron grew up in Beverly Hills, with her sisters: Delia, Amy, and Hallie. At Wellesley College, she studied political science, and after graduation, worked briefly as an intern in the White House of John F. Kennedy.

A satire she wrote on the New York Post caught the editor’s eye and Ephron landed a job at the Post, where she was a reporter for five years. Later, she wrote a column on women’s issues for Esquire, taking on a wide range of subjects, from her former boss and owner of the Post, Dorothy Schiff to Betty Friedan, whom she chastised for picking a feud with Gloria Steinem. She even criticized her alma mater Wellesley for churning out “docile and unadventurous women.”

Her first collection of essays, Crazy Salad: Some Things About Women, is a wry look at feminism in the 1960s and 1970s. This collection was followed by Scribble, Scribble in 1978, a book about the insider baseball worlds of politics and journalism.

Her second marriage was to fellow journalist Carl Bernstein, part of the duo of Woodward and Bernstein who broke the Watergate scandal for The Washington Post. For years, Ephron said she told people the true identity of Deep Throat, the anonymous source the Post reporters met with who confirmed their information, but no one believed her until Mark Felt’s identity was revealed in 2005. At Bernstein’s request, Ephron helped rewrite William Goldman’s script for All the President’s Men, because the two journalists were not happy with Goldman’s version. Ephron’s script wasn’t used but was seen by someone who offered Ephron her first screenwriting job for a television movie.

Bernstein and Ephron were married for three years. In 1979, while Ephron was pregnant with her second child, she found out Bernstein was having an affair with a friend, married British politician Margaret Jay. Ephron turned the pain of her husband’s affair and their subsequent divorce into a book, Heartburn, which was then adapted and turned into a film by Mike Nichols, starring Jack Nicholson and Meryl Streep.

Prior to Heartburn‘s adaptation, Ephron and Nichols worked together on the film Silkwood, which again, Ephron penned and Nichols directed, and again, starred Meryl Streep as Karen Silkwood, a worker at a plutonium plant who was planning to expose worker safety violations at the plant when she was mysteriously killed in a car accident.

While Ephron’s dry wit came across in her journalism, some people have categorized the movies she would later go on to direct as sappy or schmaltzy, but like anything she was involved in, Ephron’s keen sense of observation comes through, whether the subject is safety violations at a plutonium plant or two people falling in love.

When Ephron met with director Rob Reiner about an idea for a movie he wanted to do, about two people who become friends and decide not to have sex because it would ruin the friendship, she was listening to Reiner’s stories about how men think–Reiner had recently gotten divorced and was depressed–Ephron realized Reiner was the character of Harry. Because Harry had a dark side, Sally had to be lighter, more like Ephron. 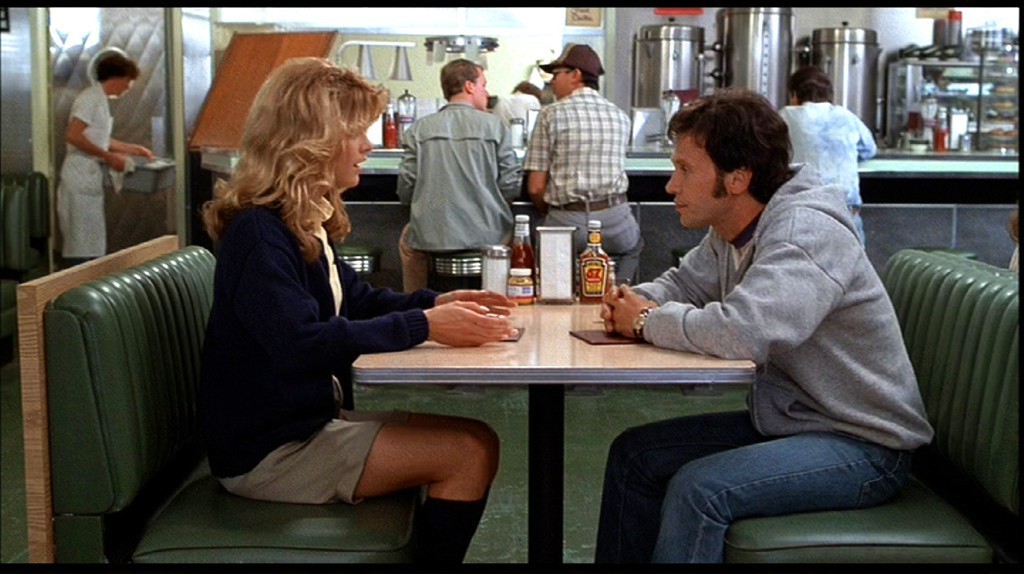 In 2012, after Ephron’s death, Entertainment Weekly posted a short piece about the film, with excerpts from a book Ephron released on the making of the film. Ephron said the film wasn’t the usual compromise for a writer once it is in the director’s hands. “What made this movie different was that Rob had a character who could say whatever he believed, and if I disagreed, I had Sally to say so for me,” she writes. Reiner believed men and wouldn’t couldn’t be friends (because a man would always want to have sex with a woman), and Ephron believed they could (because she had male friends she wasn’t having sex with). They were both right, she says. To her, the movie was never about answering that question; it was about showing how different men and women are.

And while today, romantic comedies are thought of in terms of tropes and cliches, Ephron’s use of technology in her films Sleepless in Seattle and You’ve Got Mail was years ahead of the time. Sleepless has been accused of being stalkery, as Annie (Meg Ryan) becomes obsessed with finding Sam (Tom Hanks), the man she heard talking on a radio talk show, and uses her access to public records at her job at the Baltimore Sun to track the man down. Sure, at the time it might border on creepy obsession, but in today’s world, how is it any different than stalking someone on Facebook or Googling their name? 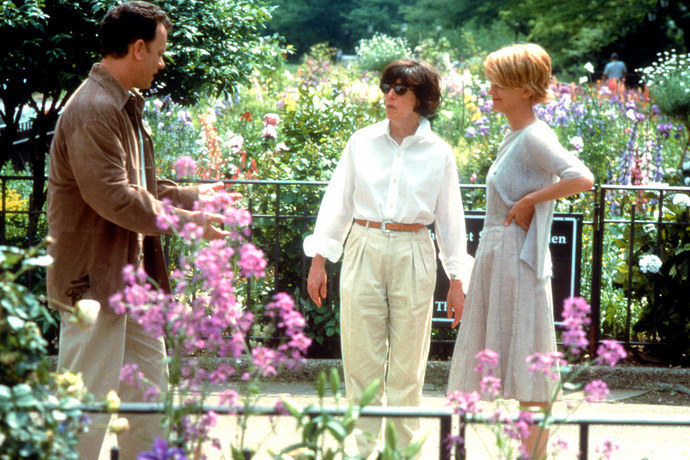 In You’ve Got Mail, the two main characters “meet” in an Internet chat room. When the film was released, 1998, the Internet was still new and meeting people in Internet chat rooms was akin to Tinder today, aka you were probably only talking with people in chat rooms to have cyber sex, much like Tinder has a reputation for hook ups, not serious dating. While You’ve Got Mail celebrates how the Internet connects us, it also explores the loneliness of investing your time and emotional well being into a connection that is only occurring online and not in real life. So many recent studies are appearing saying that spending time on sites like Facebook, Twitter, and Instagram, can have a substantial negative emotional impact on you, because it seems like everyone around you is getting a new job, getting engaged, married, having babies, or going on fabulous vacations. At one point in the film, Kathleen sends a deep question out into, as she calls it, the void. 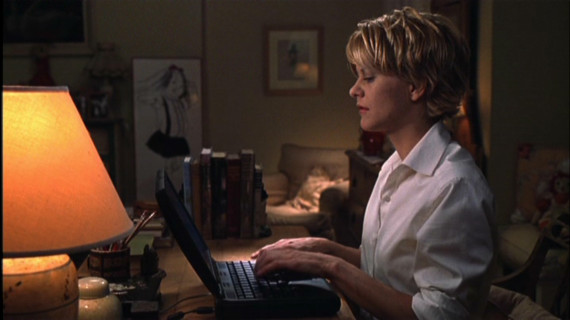 Another cultural commentary in You’ve Got Mail is the corporatization of America. It explores the effect of big box stores and corporations on the mom and pop and independent stores, as the big chain, Fox Books, puts the indie children’s bookstore out of business. Kathleen’s embrace of her competitor, Joe, at the end of the film, may be a little much for some, saying they wouldn’t give up on their values as easily as Kathleen, but that’s where the romance comes in. Kathleen hasn’t given up on her career dreams, she has simply shifted to new ones.

After her tumultuous relationship with Bernstein, Ephron finally found love with screenwriter Nicholas Pileggi, to whom she was married for 20 years before her death.

Ephron was at work on several projects at the time of her death in 2012. One, a play, Lucky Guy, was already produced and put on Broadway in the spring and summer of 2013. Another, a Jane Austen project, has been taken on by Carrie Brownstein.

Other than her on screen presence, I would recommend any of Ephron’s collections of essays or various articles you can still find online at The New Yorker or The Huffington Post.

“Maybe young women don’t wonder whether they can have it all any longer, but in case of you are wondering, of course you can have it all. What are you going to do? Everything, is my guess. It will be a little messy, but embrace the mess. It will be complicated, but rejoice in the complications. It will not be anything like what you think it will be like, but surprises are good for you. And don’t be frightened: you can always change your mind. I know: I’ve had four careers and three husbands. And this is something else I want to tell you, one of the hundreds of things I didn’t know when I was sitting here so many years ago: you are not going to be you, fixed and immutable you, forever.” -Nora Ephron, in her 1996 commencement speech to Wellesley College 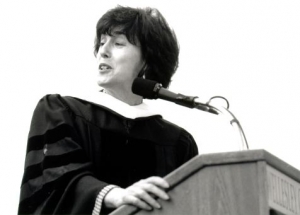