It’s already difficult for female directors to get their films made, but even more difficult if they feature a female protagonist. Gina Prince-Bythewood faced similar obstacles making her most recent film, Beyond the Lights, but faced even greater adversity because she wanted to cast two black leads.

In an interview with Roger Ebert.com, she said of bringing her vision for Beyond the Lights to the screen, “It’s disheartening, trust me, to sit in a room as a black female to hear that your story is not worthy of production. And I would hear that over and over and over. For me it was just about overcoming ‘no’ and finding that one ‘yes.’” 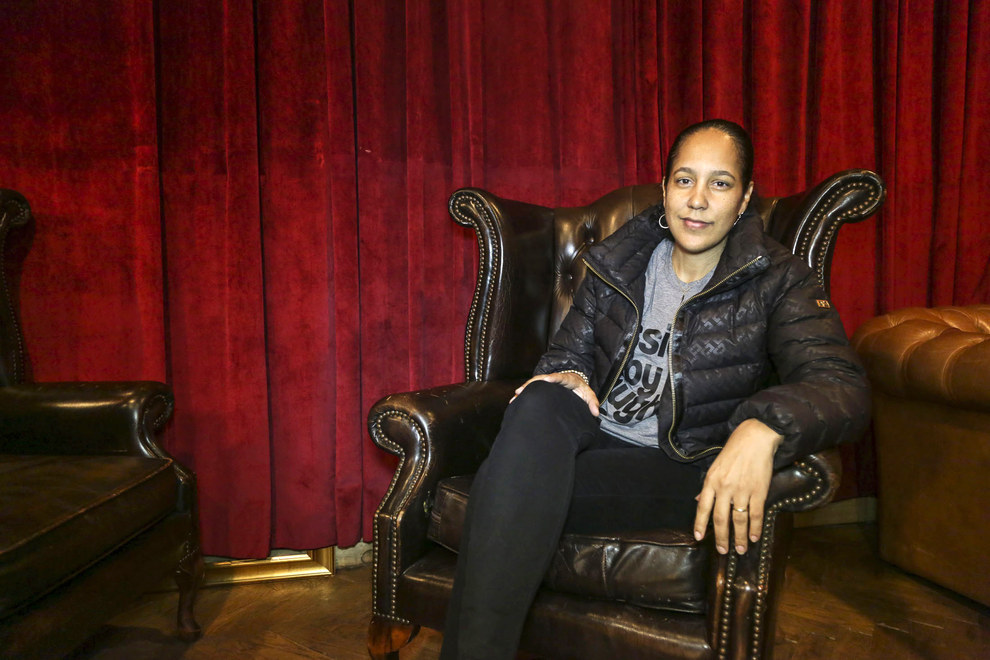 Prince-Bythewood grew up in Pacific Grove, California. At UCLA, she studied film and also ran track. She received the Gene Reynolds Scholarship for Directing and the Ray Stark Memorial Scholarship for Outstanding Undergraduates.

She spent five years as a writer working on television shows like A Different World and South Central while she developed her first film, Love & Basketball. She took her script to the Sundance directing and writing labs. At Sundance, she found her producer Spike Lee, who like her studio, New Line, believed in giving filmmakers full autonomy.

Despite Prince-Bythewood ultimately finding good partners for the film, every studio turned down Love and Basketball after she spent a year and a half writing the script. “It’s so soul-crushing when it’s so clear in your head what the movie is and everyone’s telling you no,” she told BuzzFeed. “But what keeps me going is the passion I have for the material, to see these films made. I mean, how many love stories of people of color have come out in the last 15 years?”

She has become known for her sometime catchphrase, “I write what I want to see.” “It absolutely drives me. I just distinctly recall never being able to go to the theatre and look up on the screen and see myself.”

Love & Basketball received critical praise, particularly for Prince-Bythewood’s technical polish and skill at drawing out great performances from her actors. She won both an Independent Spirit Award and Humanitas Prize for the film.

Coming off a critically acclaimed film, it seems it would have been easy for her second feature to get off the ground. Prince-Bythewood wanted to direct an adaptation of Wally Lamb’s I Know This Much Is True for which she had won the rights to by writing the author a personal letter detailing her experiences growing up with a bipolar brother. All that stopped at the studio level when Fox 2000 demanded an A-list actor to play the bipolar brother. Whenever the studio approached stars with an offer for the film, they wouldn’t say yes to working with a new director.

“That was painful,” Prince-Bythewood said in a DGA interview. “Of course, there’s comfort in a director who has done six or seven films, but that doesn’t make them any more talented, just more experienced. The actors were walking away from what could be a great experience just because of the number of films I’d done. It pissed me off. For me, it was ‘Okay, let me prove these guys wrong for turning me down.’”

She spent five years on I Know This Much Is True and took some time off when she had her children, so it was eight years before she directed her second feature, The Secret Life of Bees, starring Queen Latifah, Alicia Keys, Jennifer Hudson, and Dakota Fanning.

Prince-Bythewood began working on the idea for what would become Beyond the Lights in 2007, but she struggled to find financing after Sony, her original production company, backed out after she cast Gugu Mbatha-Raw, a relatively unknown black actress.

“We need to see black women reflected up on screen. That’s what I fight for. And it’s an incredible fight, I’m not going to lie. Beyond the Lights, every studio turned it down. Twice. There were some studios that asked if I would cast Kaz as a white actor. And…why? It’s okay to show two people of color onscreen loving each other,” she told BuzzFeed. “And then it’s a matter of fighting to make sure the movie that’s in my head is what’s up on the screen. But I’ve been very fortunate. As hard as it was to get set up, it ended up in a place where they saw what I saw in Gugu, didn’t question that I wanted Nate Parker for the male lead and left me alone and let me make the film that was in my head.”

She cites the Nina Simone song “Blackbird” as inspiration, saying the song really inspired the movie and Noni’s story. Noni (Gugu Mbatha-Raw), a girl from south London, who from an early age, has been told that second is never good enough by her mother (Minnie Driver). Noni is already a pop superstar before her first album is released, performing with established rapper Kid and hounded by gossip mags and paparazzi. After winning a Billboard award, Noni returns to her hotel room, which is guarded by LAPD officer Kaz (Nate Parker), and is found by her mother as she sits on the edge of her hotel balcony, about to fall onto the street below. We learn more about what pushed Noni to consider suicide through the film’s flashbacks to her childhood and through her relationship with her mom, ever the stage mother.

The film’s focus on the sexualization of female pop artists is a critique of American media culture and the culture of R&B music. The portrayal of a young woman as a sexualized star was loosely based on the lives of Marilyn Monroe and Judy Garland, as well as a number of singers. Prince-Bythewood, who had developed a relationship with Alicia Keys during Secret Life of Bees, did research with Keys and a number of other singers. 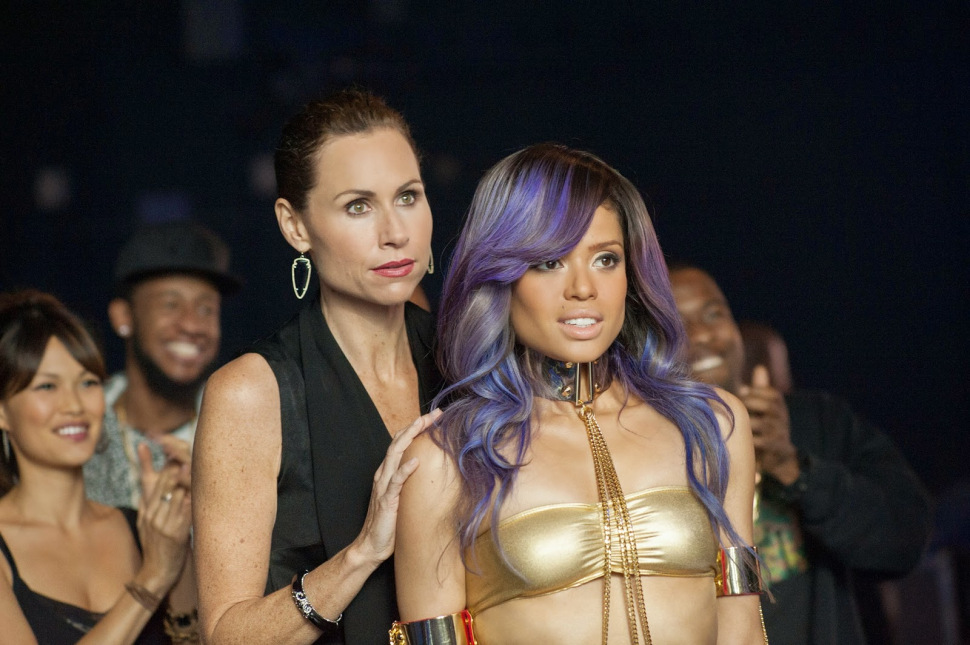 “I love films about music,” Prince-Bythewood told IndieWire. “R&B is such a huge part of my creative process and everything has its own playlist, but this music that I love so much has gone in such a strange, angry place in the last few years in terms of competition and hyper-sexuality, especially with our female singers. I don’t see what’s going to change it and I wanted to call attention to what’s happening and hopefully change the conversation.”

In an effort to be normal, Noni takes to running off with Kaz, who she feels is the only person who really sees her or understands her. Kaz, too, is being groomed by a parent (Danny Glover). His father has plans for him to become a politician and his relationship with Noni is ruining his squeaky clean image.

The film cleverly critiques the music industry and America’s unhealthy obsession with celebrity, the film is ultimately a romance. Critics praised the film and Prince-Bythewood cited the support of A.O. Scott and Anne Thompson as being invaluable to her, but the positive critical reviews weren’t enough to overcome the lack of marketing for the film, which resulted in zero recognition during awards season. 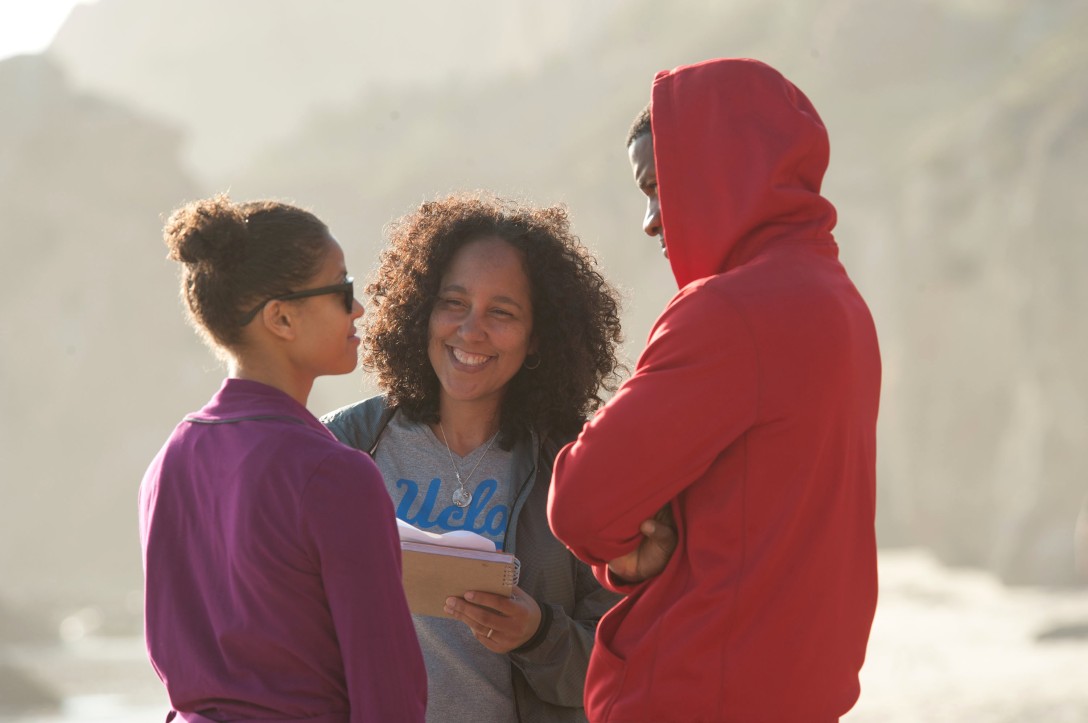 “Gugu gave a transformative performance in Beyond the Lights and she also did Belle in the same year! She did two roles like that that are 180 degrees from each other. It was a star-making performance. I think one of the issues was that that was not capitalized on or that was not the focus [in the marketing]. The focus of the studio was to make it a commercial film. My argument is that you can have critical acclaim and commercial success.”

Prince-Bythewood said Beyond the Lights taught her how much she needed to be involved in the marketing side for future projects. One of her upcoming projects is Shots Fired, a television series at Fox, which will examine the epidemic in America of the killing of young black men by law enforcement. It will reunite Prince-Bythewood and Sanaa Lathan, her Love & Basketball star.

WATCH: Beyond the Lights is available on Netflix streaming.